This month's Completer story comes from Pamela & Andrew Burtt from Sidmouth who have completed the South West Coast Path for a second time, in the other direction. 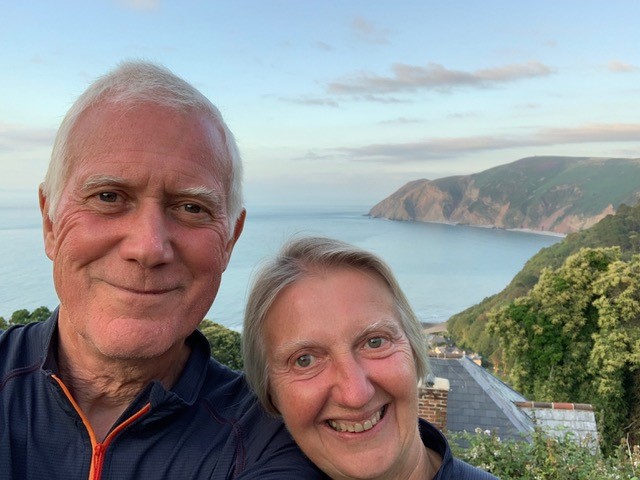 Andrew and Pamela together on the Coast Path

The first time we walked the SWCP was in the “usual” anti-clockwise direction, during four summer holidays 2003 – 2006.  This time we did it clockwise in 2018 (South Haven Point to Falmouth) and 2019 (Falmouth to Minehead), but we found it a lot tougher than 15 years ago.  The sense of achievement was immense.

Even though we were still reasonably familiar with the places and the terrain it seemed quite different doing it the “wrong” way round.  It was fun to return to the walks, towns and villages that gave us such happy memories before, and we were pleased to find that nearly everywhere seemed more prosperous and a little busier.  The scenery was just as astonishing as we remember it from the first time – rugged cliff edge walks in Cornwall, lush green dramatic cliffs in North Devon, open expansive sandy beaches and the rolling hills of Dorset – fabulous.

We started during April 2018 after several weeks of periods of heavy rain and found the going very tough.  In many places the path was surrounded on both sides by dense shrubs and we were forced to wade through some serious mud which spoiled the enjoyment somewhat and drained our energy.  It wasn’t long, though, before the mud started to dry and the walking became a real pleasure.

We recalled the scrambling around Lamorna and more significantly, Wicca Pool, from our previous walk and were surprised this year to meet walkers coming towards us from St Ives wearing sandals and flip flops – wonder if they made it!  There were quite a few choughs around the very south west of Cornwall.  Pamela spotted one first (red bill and legs) and having learned their call (djeee…errr – similar to jackdaw but with a more obvious rise and fall in tone) we were often alerted to their presence.  We had good views of peregrines, kestrels and ravens throughout our walk and some lovely wheatears at Westwood Ho! and approaching Bude.  There were stonechats, goldfinches and linnets everywhere and even a cirl bunting in the Noss Mayo area.  A special moment came when we saw a mole scurrying along the path in full view near Baggy Point.  Parts of the path have become seriously overgrown with rapeseed (Porthleven to Penzance and a few other spots in Cornwall) and we wonder whether this has become a new “invasive” species.  To the east of Lynmouth there is a problem with rhododendron spreading rapidly.

We had some really long and tough days the first time round (Hartland to Bude, Sidmouth to Lyme Regis) and were determined not to do the same again.  We now live in south-east Devon and were able to use buses to get to/from the path between Abbotsbury and Kingswear (Dartmouth) on day trips.  We prefer to carry our kit with us and have managed to get it down to an absolute minimum.  Nevertheless, it is still possible to do much of the walking with only what’s needed that day.  For example, we did the section from Falmouth to St Ives staying in only two guest houses (Helston and Penzance) and using buses to get to/from the start/finish points.  There is another advantage to this in that it reduces the number of single night bookings and is fairer to the B&B’s.  With a bit of careful planning using bus timetables it’s possible to walk quite a few sections whilst staying in one B&B.

Now that smartphones are with us we have lots of photos to look over to bring back memories.  Even so, there are several places where, with hindsight, we wish we’d taken a few more.  You’re less inclined to take them when it’s pouring with rain or blowing a hooley but then it could be an excellent time to catch the mood of the moment.

We are very happy to have been members of the SWCP Association since 2007. The documentation it produces and it’s achievements are appreciated by many.  Thank you.

Stay up to date